Ian travels the world, both consulting and making presentations. Commercial bookings are arranged via his company, Spectre Consultancy Ltd. , which can be contacted via the above e-mail address.
A list of the companies he has spoken for are listed here.

He has very radical and constructive views on applying information and communication technologies (ICTs), and he is very critical of what he calls “the pseudo‑science of academic Information Systems.” His highly articulate presentations of his controversial position means he is in great demand as a speaker on the international lecture circuit. Apart from his keynote talks on Computer Security, on business strategy in a world globalised through ICT, he is also well known for his workshops on new tactics for sales and marketing using the Internet, and for his pragmatic, down-to-earth and outspoken views on electronic commerce, Cloud Computing, Big Data, and other developments in ICT. 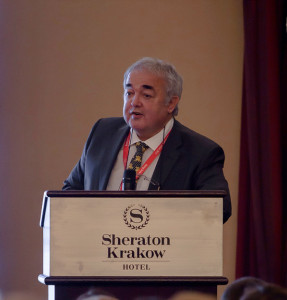 His work has generated substantial media interest, and he is frequently interviewed for radio (particularly Radio 4 and BBC World Service) and television. Appearances include all five British terrestrial channels, Sky, NBC, CNN, and national television in Australia, Canada, Hungary, Italy, and Poland, as well as many business satellite channels.

His ideas concerning ‘the future of work’ and ‘the future of money’ have been reported widely in newspapers from as far afield as Australia, Belgium, Brazil, Canada, Denmark, Eire, Finland, France, Germany, Holland, India, Israel, Italy, Jordan, Malaysia, Norway, Poland, Portugal, Singapore, South Africa, South Korea, Spain, Sweden, Switzerland and of course the USA. Major titles reporting his work include the Wall Street Journal, the Toronto Star, Independent, Times, Evening Standard, Guardian and Financial Times, the Sunday Mirror, the Scotsman, Marketing Weekly, Computing, Computer Weekly – the on-line version of Wired Magazine, Director Magazine and even the KLM in-flight magazine! The Independent on Sunday called him a ‘Prophet of the 21st Century’ and used his ideas for a three-page article, and the Times Interface magazine printed a two-page cover article on his ideas. He has spoken at conferences for Fortune (New York, Colorado Springs) and the FT (Berlin). He presented his ideas before the Parliamentary IT Committee at the Palace of Westminster to a cross‑party group from both Lords and Commons, and they were “profoundly disturbed” and “visibly shaken” by his forecasts. He was nevertheless invited to be the first to give evidence to the House of Lords Select Committee on e-commerce in Europe, where he “managed to knock the gyroscope over.”

Professor Angell acts as a consultant on the management and strategic impact of information systems, to many national and international organizations and to a number of governments and the EU. Until 2000 he was a personal advisor to the Cabinet of the Director General of UNESCO (Federico Mayor), and he has consulted for the Russian Ministry of Science on the impact of IT on employment. In January 1998 he was invited to present his ideas to the Malaysian National IT Council and had private meetings with both the Malaysian Prime Minister Dr. Mahathir Mohamad and the (now ex-) Deputy Prime Minister Anwar Ibrahim. He has also come to the attention of some very senior international businessmen and politicians who have invited him for private discussions about his ideas. In May 2003 he was asked to hold number of private advisory sessions with three of the sons of Sheikh Mohammed Al Maktoum, Crown Prince of Dubai.

His growing reputation comes as the culmination of over thirty years work developing a new perspective on information systems, stressing that the social, economic and organizational issues are more important than the technological ones: even the very best investment in new technology can be a source of commercial risk, if the societal aspects are not managed properly. This alternative position is having wide‑ranging repercussions both in educational and business circles in the UK and increasingly abroad. In particular he emphasises that even the very best software and investment in the Internet will be a total waste and the cause commercial risks if the complexity caused by societal aspects are not managed properly. He has gained a certain notoriety worldwide for his aggressive polemics against the inappropriate use of artificial intelligence and so-called knowledge management, and against the hyperbole surrounding ‘e-commerce.’ His research work concentrates on strategic information systems, on computers and risk (opportunities and hazards), and on organizational and national I.T. policies.